Address to the President of the Swiss Confederation

I would like to congratulate you upon your appointment as the President of the Swiss Confederation and to wish you health, strength, energy, and success in your duties under this highly responsible governmental mandate.

On a number of occasions I have visited your country. I never cease to be amazed by the maturity of the civil society here, where citizens take part in the majority of political decision-making, as well as by the unique political culture that has enabled the century-long harmonious coexistence of several peoples who have over time maintained their unique identity. Owing to the long-standing neutrality, your hospitable country has hosted important peace-making talks and a number of recognized international organizations have set up their headquarters in your country. Thus, Switzerland makes a significant contribution to maintaining peace and balance on the planet.

One of the most dramatic and intense episodes of my life links me with Geneva. This is where 30 years ago the following proposition emerged: ‘Nuclear war cannot be won and must never be fought’. That was followed by the signing of an agreement to destroy a range of nuclear weapons and drastic cuts of strategic weapons. ‘Détente’ process began. Geneva was the source of the wind of change. Walls started coming down. And one of the key global challenges of that time – the threat of nuclear destruction of humanity, – subsided. As a result, the freed resources were put to use for the economic development. Global economy received a powerful impetus.

However, we have missed the emerging prospect of building a more secure world.

The United Nations established by national states in order to free the succeeding generations from the scourge of war, which twice in the XX century brought untold sorrow to mankind, and to reaffirm faith in fundamental human rights, in the dignity and worth of the human person, has not always been effective in critical situations and has not tackled numerous humanitarian issues.

Countries that achieved significant results in generating material and spiritual values and in improving the quality of life for their citizens do not make full use of their capabilities to address the global challenges humanity is facing.

Science and technology revolution that continues to date offers immense opportunities to address global issues of the modern world and to support the thriving of humanity. However, the potential of these opportunities is not fully tapped into.

I believe that the global civil society is to become an active participant of the global political processes and until it does, there will be no effective solution to the global issues humanity is facing.

This is why I together with like-minded people representing different countries who are aware of their responsibility for the processes occurring in today’s world have decided to set up an international non-governmental and non-commercial organization World Forum, which would become an open platform for discussions aimed at finding the ways to address global issues of the modern world. We invite politicians, public figures, scientists, experts, those working in culture and art, as well as socially active citizens of different countries who share the main principles of the Universal Declaration of Human Rights to take part in the upcoming discussions.

To organize such large-scale activities we intend to establish a specialized social network as well as to develop and implement advanced software and hardware to ensure processing large volumes of information and to enable coordinating work of millions of people focusing on complex tasks and projects.

We plan to widely use crowdfunding to finance our activities and to address complex tasks we intend to invite volunteers (crowdsourcing).

We are confident that the work of the non-governmental non-commercial organization World Forum will facilitate the consolidation of the global civil society and will strengthen its impact on the global policy. We hope that this will result in efficient resolution of multiple global issues, which impede evolution of more advanced society built on principles of humanism and equity.

These were the proposals I brought to the attention of participants of UNESCO’s 38th General Conference on 17 November 2015 attended by heads of states and governments who convened to celebrate the 70th Anniversary of UNESCO’s Charter.

Your country is one of the centers of international activities. Geneva alone annually hosts thousands of international meetings and conferences on crucial global issues, including addressing of international conflicts and their settlement. I hope that the role and significance of this Europe-based United Nations platform will grow stronger. The expected focus of our organization’s work can be complementary to this end. This is why we would like to register and establish the headquarters of the international non-governmental non-commercial organization World Forum in the Swiss Confederation, in Geneva, the city where global policy issues are addressed. We would like Geneva to again be the source of the wind of change!

I would also like to request a meeting with you for my official representative, Mr Vitaly Nikolaevich Nasedkin, who will be in charge of establishing and registering the international non-governmental non-commercial organization World Forum, and to ask you to support his activities, as you deem reasonable. 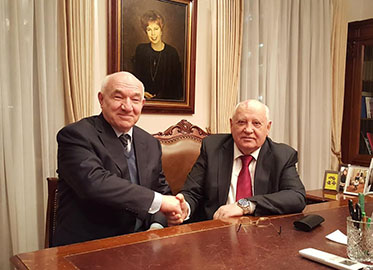