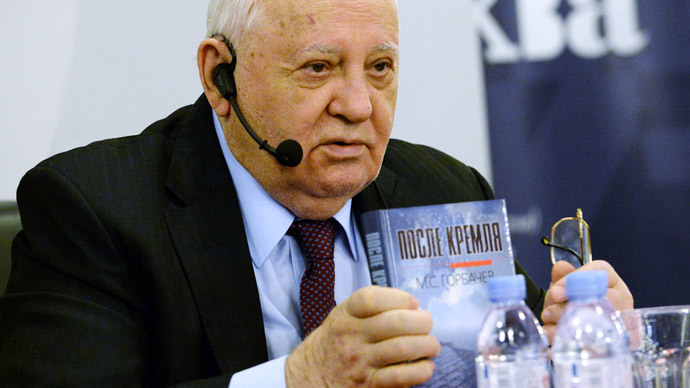 Former Soviet President Mikhail Gorbachev says that he’s working on a strategy of stabilizing the international situation by introducing a new effective global dialogue platform to augment the “lame UN.”

“Serious-minded world circles” have asked him to come up with such a platform during the celebrations of the 25th anniversary of the fall of the Berlin Wall earlier in November, said Gorbachev, 83.

“It’s going to be a very big thing. There’ll be first steps and second steps, aimed for it to become a global platform for discussion of problems. It must be very representative, capable of influencing both state and international institutions, authoritative because the UN is, unfortunately, lame at the moment,” Gorbachev said during the Moscow presentation of his new book, “After the Kremlin.”

He said his platform “would calm the world, would stop things that are going on, would rule out such bloody events.”

“Real institutions must be created in a global world, that would help the United Nations in decision-making, in drafting these decisions,” Gorbachev said. “Things will fail without civil institutions that would incorporate people’s wisdom.”

Gorbachev declined to give any names, but said that the creation of the dialogue platform will be discussed with “very experienced people, respected by global public opinion.”

Thursday’s book presentation gathered a huge crowd, with hundreds lining up in the street outside the bookshop to get an autograph from the author, Tass news agency reported.

Despite his age, Gorbachev assured those who came that he’s in good health and his spirits remain high.

He said that coped with the pressure on him after the fall of Soviet Union in 1991, and plans “to keep living.”

“I invite you to my 90th birthday. I’m sure we’ll be celebrating it,” he said.

He called Russia’s incorporation of Ukraine’s Republic of Crimea a correction of a Soviet-era mistake, condemned Kiev’s military operation in southeastern Ukraine and called US President Barack Obama “a lame duck” for finishing his second White House term in a “mediocre” way.